I've been looking at buying a juicer for a while. One that is easy to store and clean. Any thoughts? 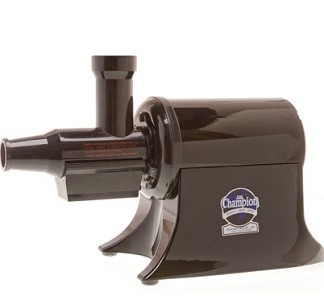 Over the past 20 years I've been associated with households that had Juiceman orig, Juiceman Jr., Waring Pro and Champion. Of those the Champion is the only one that I'd seriously recommend. It takes up a pretty significant counter footprint and is heavy enough that you won't want to be moving it everytime you want juice. So, it's not for everybody, but it is robust enough to make juice daily for 15-20 years. I got mine used off ebay and I occasionally see them for $50-75 on ebay or craigslist. It's the only residential juicer that I know of that is robust enough to have a flour grinding optional attachment.

Make no mistake, it's not asthetic, won't go with any decor but Hobart commercial kitchen, doesn't even come with a juice catch cup, which needs to be something on the order of a small loaf pan, and is more than a wine bottle tall and more than a wine bottle long, it really does require dedicated counter space. Oh, and it's kinda slow. But if you want a juicer that can juice 5 lbs of carrots, a bag of apples and a couple heads of cabbage, week in, week out for 15 years or more this is still my pick.

I've had mine 18 or so years and never had an issue. The thing is a beast.

def champion my father in law has had his at least 10 years and we've had ours for 5 years. HEAVILY used daily.

And shopcat suggests the Champion Juicer too.

Galts_and_Joads suggests the Omega 8006 juicer in this thread.

BIFL.org is a participant in the Amazon Associates Program, an affiliate advertising program designed to provide a means for sites to earn advertising fees by advertising and linking to Amazon.com.